Funnel University Review – The Ultimate Add On For Your Clickfunnels Account.

So what are you going to learn in this Funnel University Review ? One of my own key take aways from having funnel university was that there’s still a lot to learn. Soon as I opened up my membership I had access to over years of content. This is sent out every month to members. Now I could look forward to having new funnels hacked by Russell Brunson sent out direct to me every month.

Plus ALL the back issues !

This was powerful. Not only does it go into detail of how each funnel was put together, but also how to make it even better.

Also got everything below mailed out ! 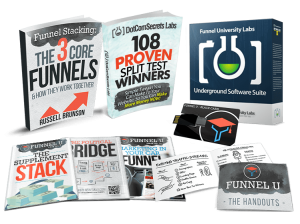 Now as if that wasn’t enough, it also included full access to the Funnel University Labs Software.

This software suite includes pretty much everything you need from cf pro tools. It’s a whole section of custom code that you can add to your funnels.

Everything designed to help maximise conversions and ultimately make you more money !

My Funnel University Review wouldn’t be complete with talking about the 108 split test winners book ! 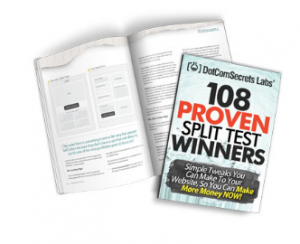 In my eyes this is the ultimate guide to website optimisation !

At the time I was building a number of funnels. Some were simple opt in funnels to build a list of interested people. Another was an actual product funnel, where I wanted people to buy something from me.

I took some of the split tests that have already been proven and apply them to my own funnels. The best way I thought to start put would be run split tests. I’d create two versions of the same page and allow 50% of traffic to run to each one. On each page there would be small changes.

After running more traffic to the pages I was able to read which version of the page proved to be the winner.

Normally setting tests like this would be a nightmare, but thankfully the Clickfunnels Software has this feature built in. So with a few clicks I had the tests up and running.

How to run split tests

I figured there was no point trying to figure out what changes I could make, so I relied  on what I read in the 108 split test winners book. To start with I tried a simple change of colour on the opt in button.  After leaving it for 3-4 days I noticed that one colour seemed to get more attention.

What to know what it was ? Well, your going to have to get the book 😉

Another great feature of the Clickfunnels software is that you can animate buttons on your website landing pages. This also proved a hit and the conversions went up again.

As the book states, there are 108 split test winners that you have access to when you join Funnel University. Having access to all the previous funnel university ‘monthlies’ is also worth the membership fee alone. I heard that you can buy CF Pro tools elsewhere but you will also have full access to everything you need inside the funnel university membership.